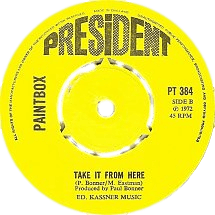 Grew from the ashes of 60s pop psych band Katch 22. Initially a vehicle for Australian writers Vanda and Young, who produced a previous single and the A side here. Gave the name to Mike Eastman and Paul Bonner and the band then took on life of their own on the circuit in early 70’s Britain. The B side is a great slice of period poppy glam.